THE TALE OF THE FOX 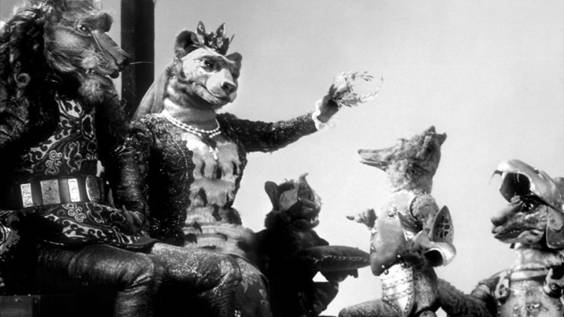 (Irene and Wladyslaw Starewicz, 1930) · Based on a medieval French fable, a clever prankster of a fox named Reynard delights in making fools out of all the other animals in the Kingdom. His shenanigans are a source of constant complaints to the (lion) King, who orders the fox arrested. When he cannot be caught, the King personally leads an army to find him. This film from pioneering animator Wladyslaw Starewicz was only the sixth animated feature film (and the second using puppet animation) produced in the world.

French poet and writer Andre Breton in his 1924 First Manifesto of Surrealism defines the art-form in this way:

“SURREALISM, n. Psychic automatism in its pure state, by which one proposes to express — verbally, by means of the written word, or in any other manner — the actual functioning of thought. Dictated by the thought, in the absence of any control exercised by reason, exempt from any aesthetic or moral concern.”

Through this definition, Stop Motion Animation may be called the truest form of Surrealist filmmaking, its techniques possessing an inherent dream-like quality. An illusion of life is created directly from the mind of the animator as they manipulate their characters and mise-en-scène by hand, expressing their vision sans any intermediary. Surrealism is often the modus operandi of stop-motion filmmaking not the end, as the stories told transcend all genres.

Stop Motion supersedes other theatrical forms as it also creates an illusion of time. Each frame of a stop-motion film is the momentary-encapsulation of many minutes if not hours of painstaking work to make the unreal alive and the impossible exist. Since the inception of the art form in Vitagraph's The Humpty Dumpty Circus in 1898 and Thomas Edison’s Fun in a Bakery Shop (1902), stop motion filmmakers have sought to present magic on the screen.

The genesis of Stop Motion as a big-screen phenomenon came in 1915, when Thomas Edison took on a young animator named Willis O’Brien to produce a number of dinosaur and caveman themed films. His works with led to his being hired to animate the 1925 prehistory The Lost World and ultimately RKO’s 1933 epic King Kong. In 1949 O’Brien won an Academy Award for Best Visual Effects for Mighty Joe Young, animating alongside a young Ray Harryhausen (Clash of the Titans, Jason and the Argonauts) whose fantastical work would soon become synonymous with the art form.

Simultaneously, the first completely animated feature films were finding their beginning overseas. The Russian Stop Motion folktale The Tale of the Fox (1930) featured nearly 75 individual puppets, ranging in size from just over an inch tall to over a meter in height. Eighteen months of (often solo) work from pioneering animator Wladyslaw Starewicz made this truly the first puppet feature in the world produced, screening in Berlin in 1937.

Contemporary animators span the greatest number of genres, which this film-series explores. Czech legend Jan Svankmajer’s (Alice, Faust) often dark-edged interpretations of fairy tales contrast with the absurdist, physical humor of Nick Park’s Wallace & Gromit. The earliest Stop Motion sequences within live-action films lacked the time and budget needed to tell a complete story, and the medium’s jerkiness often distracted the audience disallowing needed character development. Modern software and technology allow for the most lifelike and seamless motions in contemporary animation. Despite the prominence of CGI, stop motion’s unmatched tangible ability to show texture and depth has the art of Stop Motion thriving now more than ever.