THE PREMIERE OF FETICHE 33-12 film by Ladislas Starewitch

In 1933 Ladislas and Irène Starewitch directed and produced a film which was about long. They called it “LS 18”for the lab.

Under the pressure of distributors L. Starewitch had to drastically cut into his work. In 1934 he released a part of “LS under the name of The Mascot. It was only long and was the first episode of a series.

In 1954, adding the cuts from “LS that had not been released in The Mascot to parts of The Mascot, Ladislas Starewitch directed another film he called Gueule de bois.

Recently we started to reconstitute the original “LS 18”:  we used the best material from several copies of The Mascot that had been distributed in the and in the , the negative of Gueule de bois and various shoots kept in the Starewitch Archives.

For the first time ever, Fétiche 33-12 will be screened within the ceremony Award of the Ladislas Starewitch Scholarship of the Conseil Général du Val-de-Marne, 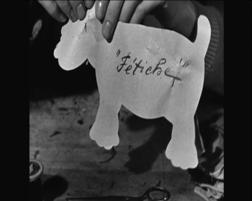 To Terry Gilliam The Mascot is the best animation film !