To a great extent Starewitch is a self-taught man who earns his leaving by selling his pictures.

1907 : Birth of their first daughter Irène. As a child she acted in her father’s picture The Lily of Belgium and other films.

To throw light on the way insects used to live he directed Lucanus Cervus, his first frame by frame picture using artificial stag – beetles made of plasticine and wire - his first animated puppets.

Encouraged by the success of this first animated film, he writes and directs his first scripts : The Beautiful Lukanida, in 1910, and The Ant and the Grasshopper, in 1911. He works for Alexandre Khanjonkov a well-known film producer. It’s an international success.

1912 : Ladislas Starewitch settles in his own home movie studio in Moscow.

When World War I breaks out, Ladislas Starewitch has already directed about twenty films among them feature-films with famous actors like Ivan Mozzhukhin.

But warfare and the Russian Revolution put an end to this comfortable life to come. He works for diverse producers.

1918-1919 : Ladislas Starewitch leaves Mocow for Odessa and Yalta. The Civil War and economical difficulties force him to leave Crimea. He goes to Italy, stays there for a while and goes to France.

1920 - 21. He arrives in France and definitively settles in the suburbs of Paris ; at first in Joinville-le-Pont and then in Fontenay-sous-Bois.

Working in his own home movie studio he produces and directs films he has then distributed by various companies. In the 1920’s Ladislas Starewitch only directs animated puppet films. Thirteen short films are shot during this decade some of them include actors.

1925 : The Voice of the Nightingale (1923) is awarded the Hugo Riesenfiels Medal " as the most novel short subject motion picture in the USA during the year 1925 " (Medal inscription).

1933 : Breaching of this contract. All future Starewitch films are co-productions.

1947 : Zanzabelle in Paris is awarded the Gold Medal at the Venice Festival for the best children’s film. Ladislas Starewitch starts directing Midsummer Nightdream, a project he had been working on for ten years but he has to give up because of lack of money.

1949 : Fern Flower is awarded the First Price for the best animated film at the XIth Children’s Film Festival in Venice.

1965 : February 26th death of Ladislas Starewith while working on his last film " Like Dog and Cat ". 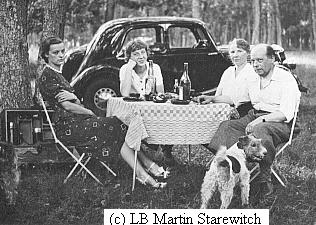